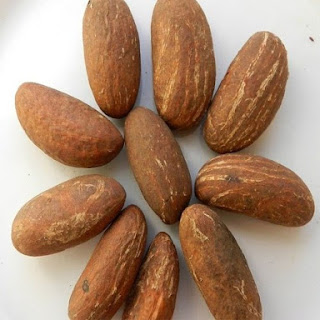 Medicinal value of Bitter Kola
"O bughi ka akiilu si ada,ka o si ato," is a popular adage in Igboland which implies that u can only verify the sweetness of a pudding when u eat it." The bitter kola sounds palatable when chewed, but doesn't taste as such!
known in Yoruba land as Orogbo, in Hausaland as Miji-goro, and in Igboland as Akiilu, bitter kola also known as Garcinia Kola is a tropical flowering plant found mainly in western and central Africa. The nut has an ellipsoid shape, is about 3-5 cm in length and is covered by a brown peel. It is bitter when chewed, hence the name “bitter kola.” Along with kola nut, its consumption was believed to be an exclusive preserve of the elderly people in most traditional African societies because as was said, it helped in increasing life expectancy among the aged. According to one Chief Victor Okafor,  an octogenarian from Ifite-Ani village in Agulu town of Anambra State, “the beauty of life is in bitterness. Thus, the bitterness observed while chewing bitter kola is actually the beauty of it. It is not meant for children.”
A lot of researches have been done on the medical importance of bitter Kola. Before I go to them,  it is worth knowing that there are lots of traditional benefits of bitter kola,especially in the typical traditional African society. Years back, I once ran into my now late grandmother spreading already chewed bitter kola along the edges of door to our house. As a curious child, I wanted to know the reason for the act. Her response of , “you are just  a child,you won’t understand” did not deter me from persisting to know. Eventually she told me that spreading the chewed bitter kola around the house scares away  reptiles and insects. I eventually believed the statement when she called me the next morning and pointed to the. Lo and behold, about a dozen of cockroaches and wall geckos lay dead!
Bitter kola can serve as an anti poison and as well evil spirits repellant. The later sounds ridiculous, but take it or leave it, a lot of people claim it works for them. But according to a certain herbal doctor, in the event of food poisoning, the bitter kola should be eaten alongside its bark. I have not personally tried it, but when I spoke to one Mr. Bassey Effiong of Mbukpa, Cross River state, his only son once survived food poisoning due to the timely administration of bitter kola on him. According to him, bitter kola has saved many lives in their community and is still saving a lot more. “Indeed, the best things of life come at either little or no cost,” was his last statement, implying that notwithstanding the numerous benefits of the bitter kola, it is still very affordable.
In the 2010 issue of Journal of Medicinal Plants Research, a good number of traditional healers in the Democratic Republic of Congo revealed that bitter kola has anti-malarial effects in the body, due to its quinones content. The bitter kola equally contains kolaviron  found to inhibit malarial activity.
According to Simon Adekunle, a researcher, bitter kola helps to improve respiratory function after 28 years of the use of a Garcinia extract. Thus, bitter kola has been used for centuries to treat colds in traditional medicine.
An increase in eye pressure can lead to glaucoma, according to a report from the New York Times Health Guide. Researchers at The Lagos University  Teaching Hospital in Nigeria tested the effectiveness of eye drops that contained 0.5 percent extract of Garcinia kola. The results of their study, published in the January 2010 edition of Middle East African Journal of Ophthalmology, showed that the opthalmolic solution that contained the Garcinia significantly reduced eye pressure when used twice a day.
Obesity has been on the increase around the world. People spend good time filling their systems with fats and carbohydrates, thereby exposing them even more dangerous health situations. The bitter kola helps in this regard, by acting as hunger suppressant and helps to increase the urge to drink water. This is an age long practice in most African societies.
Bitter kola is said to have aphrodisiac qualities. According to Dr. Nkem Akueba of Landmark Hospital Enugu opined that bitter kola can increase a man’s urge to have sex as well as help cure erectile dysfunction and premature ejaculation without side effects. This he said is better than consuming over the counter medications which cause more harm than good. He however counselled those suffering from performance problems to seek out appropriate medical treatment for the long term.
Osteoarthritis is the most common form of arthritis, characterized by pain, inflammation and limited movement in the joints, according to the National Institute of Health. Causes of osteoarthritis can include joint injury, obesity and ageing. Since many arthritis patients prefer natural herbal remedies to other medications, researchers at Obafemi Awolowo University in Nigeria tested the effects of Garcinia Kola against arthritis symptoms. The result of the study, written by Olayinka O. Adegbehingbe and published in the July 2008 edition of Orthopaedic Surgery and Research, conclude that Garcinia kola significantly reduced inflammation and pain,as well as increased joint movement in patients that had osteoarthritis symptoms.
All in all, there could be a host of other medicinal and traditional benefits of bitter kola, but it is evident from those discussed above that it is something that is worth consuming and having in everyone’s home.