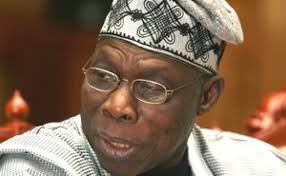 In the past week, the polity has been awashed with Obasanjo's open aversion to President Muhammadu Buhari's second term aspiration. Not that it was the first time or he was the first person to have openly decimated this administration, but it was his personality that made his vituperations gain so much public relevance. More so, it was this same Obasanjo that had openly supported the enthronment of this same administration. A lot people and groups have come out to endorse Obasanjo's assertion that Buhari does not deserve, and should not contemplate running for a second term due to his alleged gross incompetence and fledgling health. What Obasanjo has failed to tell is this : is he of the opinion that we should not vote in APC, or is it just the person of Muhammadu Buhari? To Nigeria who believe in his guidance, who or which party does he advocate for?

That Obasanjo is a schemer of repute is not under contention. From his antecedents, it is important to realize that Obasanjo, like most politicians is self-centered. Whatever views he may have are self serving. From his open witch hunting of his adversaries to the botched third term bid, we should not be in a hurry to herald his statements.

His recent criticisms of Buhari is tantamount to speaking from both sides of the mouth. Why has he suddenly realized that Buhari is incompetent? The same Buhari he had known for decades? In 2011, he had presented Dr. Goodluck Jonathan to everyone as "a breath of fresh air" only to make a u-turn years later with the now infamous "open letter " disparaging the same administration he had helped mount the saddle.

It is very clear that perhaps, Chief Olusegun Obasanjo does not want any president to serve as long as he had done. Of course, he gave us an ailing Yar Adua and a political rookie Jonathan  in 2007, and supported a Buhari that was believed by many of not being in the best condition. Why should we continue to take OBJ seriously? He has acccorded himself the Kingmaker status which I believe he doesn't deserve. He is not the only ex-president we have. Perhaps he needs to be reminded the way he was bundled out of prison into Aso Rock.

I am not a fan of this present government, but the fact that Chief Olusegun Obasanjo sees his government as the only one without blemishes is sickening. He is always quick to condemn successive administrations, but fails to note that most of the ills of today were hatched by his administration. From impunity, to disobedience to rule of law, corruption, to mention but a few were no better during his watch as the president.

The destiny of Nigerians is in their hands, not in the hands of a self acclaimed god father. We know what we want. Will we ever have a president Chief Obasanjo will compliment?