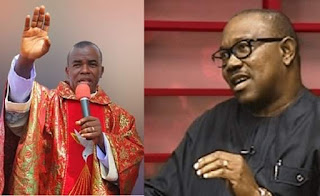 Prologue : Brandishing ill-gotten wealth and splashing it in a house of worship does not make it clean! Gathering political hawks and societal moral misfits simply because of insatiable materialism is sheer religious promiscuity. Coaxing politicians to surrender siphoned funds to you while playing a demi-God is to say the least, religious opportunism and abracadabra!

With the reference of the alter of God as "Mbaka's Alter", It is clear now to the blind adherents of the so called Adoration Ministry that all these years, they have been worshiping the man, Ejike Mbaka, not the Almighty God.

I hardly comment on the religious thievery going on in Nigeria and the utter stupidity of the followers of the so called "men of God" (money). This is because the gullible followers who are in the majority are still neck deep in religious bondage,and it would be a waste of time trying to dehypnotize them.
Nigeria is currently occupying the unenviable position of the country with the poorest people on earth! Ironically we have the wealthiest preachers and the highest number of churches in the world. What an irony! Well, this is a story for another day.

Sadly, a lot Nigerians are unrepentant religious slaves. They look in utmost stupidity as the robbers on pulpit continue to gallivant with politicians to further put them in perpetual slavery. Truly, Nigerians are really cursed. I blame the blind followers, not the opportunist Pulpit bandits. Mbaka is a slap on the catholic church, so are the majority of these criminals. Peter obi need not quiver, for there are a plethora of us who cannot be cowed by such gluttonic extremism. If this was the method the early missionaries had adopted, our forefathers would not have been wooed into Christianity! Any person who opens his mouth to defend the unholy marriage between these pulpit bandits and politicians needs to have his head examined! The end to religious banditry is near!
To be continued...