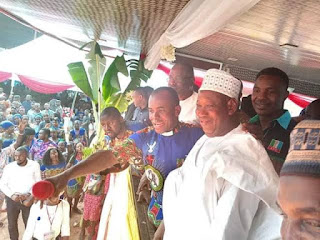 The Unholy Alliance! (My New Year message)
As the great poet Odia Ofeimun opined in his poem, "we must learn again to fly," 'some wounds cut so deep/we forget where the pains come from. We itch from congealed blood to brimless seas/we forget how to flow.' Such is the reality of the state of affairs in Nigeria,depending of course, how you choose to interpret the lines.
We wake up every morning seeing the state of the nation continually worsening, not knowing (or rather choosing not to admit knowledge) of what is happening. Foolish as we are, we know quite well those who are messing around with our collective destinies, but what do we do? We keep applauding and backing their devilish acts, albeit blindly. We receive bags of rice from them during yuletide and we keep "thanking God for their lives" and asking God to replenish their pockets a thousand fold, however the money came. That, He has been doing anyway.
The fact that our religious leaders are, and have continued  to dine and wine with the bourgeois (especially corrupt leaders),as well as implicitly applaud their  exploitative practices is a testament of the colossal moral degradation as well as the helpless and hapless state of the common man. No wonder, religion and politics are fraternal twins, especially in the act of moral and economic exploitation. Remember the song "religion na politics" by Majek Fashek!
Nigerians are religious fanatics;that is one of our core problems. We talk about bad leadership. We talk about bribery and corruption, but most of the religious leaders live off corruption. The majority of them are beneficiaries of looted funds, and they cannot claim ignorant! They live large mostly through the "benevolence " of the corrupt, while closing their eyes from the source of the money they supposedly receive "on behalf of God." How then do you expect your religious leaders to aggressively criticise the government? If they do so, their source of flambogance and extravagance will be shut! What then becomes our fate, since our religious leaders cannot stand up to the political and corrupt class?
Talking about Nigerian politics is a waste of time,but know that a lot of people that will vote for Buhari next year are the worst hit by his government! But,  their religious leaders who must have received kickbacks from Buhari's apologists have told them that "God has mandated them to move to the next level." Nigerians' peculiar ways are disheartening and shocking.
Next year will be greater of course, for those who this year has been great for. For those who this year has been a nightmare for, let's see the  miracle next year has,when you keep doingthe same thing and expecting something new.
Just as the "men of God" are in fraternity with the bourgeois, the "thieves" of our common wealth, the ordinary citizens need to form an alliance and make sure we return to our senses, and call a spade a spade. Eschew foolishness. Remember, our politicians are the wealthiest! Our clergymen are the wealthiest, but our citizens are the poorest! Gory enough, the source of their wealth comes from the common wealth of all!