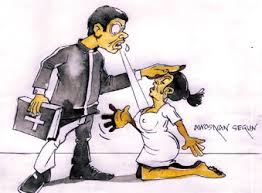 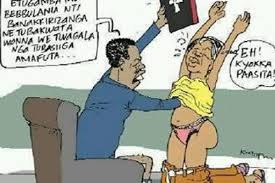 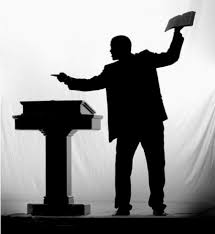 A friend of mine once said cynically in between bottles of beer that men of God in Nigeria are powerful only in the Nollywood movies! As an ardent Christian, I had refused to be drawn into unproductive arguments about men of God and their possession of 'spiritual powers' or otherwise. I had known him as a 'free thinker' who saw church as a mere social gathering.  He was one of those who preached the idea that 'church is in the mind'. Hmm.  That's by the way, I am not here to discuss such issues. But the question that keeps begging for answers is, has the 'proliferation' of churches led to a better society?  Are we better off with it? The answer is a resounding No

One of the problems we have among Africans is that we attribute every single misfortune we have to the handiwork of the enemy. We are so scared of the unknown to the extent that when an ordinary bird flies past one's home, screams of 'holy Ghost fire' fills the air! We point fingers at our neighbours, colleagues, even relatives over problems we might have even caused ourselves! Instead of taking pragmatic steps towards solving our problems, we provide 'employment opportunities' to opportunists who claim to be men of God. Thus, anyone could wake up and start fronting as a seer, sapping people of their meagre earnings.

I may not be a 'man of God', but the little knowledge I have of it is that the gift of God is free. Prayers and 'miracles' are not for sale. Appreciating a man of God is not the same as paying for 'spiritual services'. Everything has now been monetised, to the extent that price lists now exist in prayer houses. The  now popular  "family visitation/prayer" or "oru ezi na ulo" has squeezed fortunes from people, especially the low income earners, and each time it is done, 'mysterious' charms must be unearthed!  People are told to pray and fast even more than Christ did. After all these, things seem to worsen for those who do it! Why?

How do you expect a young lady without good upbringing, and without sound morals and manners to easily get a God fearing husband?  Instead of trying to fix these dark sides of her life, she makes prayer houses and spiritual homes her abode!  A man who does not put in considerable efforts in his career quickly seeks spiritual help when he has not done his own bits.  Instead of going for fertility tests and taking medications, childless couples, with the story of Sarah in the Bible, spend time 'waiting unto God.'

What some of these so called prayer houses or healing homes have done is destabilising of families. They ignite fire and create enmity between members of a family, making each person believe that either his or her in-law, uncle etc are responsible for all the misfortunes he or she is passing through.

I am not saying that there are no genuine men of God . Possibly there are,  but they are in the minority.  Performing "signs and wonders" does not make one a man of God. Remember the story of Bar Jesus.  Magic and miracle are poles apart. While the former is temporary and with grave consequences, the latter is permanent, freely given and comes from God. But since all lizards crawl on their bellies, how do we recognise the ones with stomachache?

The essence of this work is to remind us about what we know very well, but chose to be blinded by sanctimoniousness. God answers our prayers, it mustn't have to be said on our behalf by anyone. Let us first of all look inwards and try to amend our lives before resorting to  "panic prayers". We are worshipping God not any prophet, brother, priest or whatever title one possesses.

There are bad and evil people in our society, granted. But not all our problems are  'sent' to us by our 'enemies'. As a matter of fact, we are the number one enemy of ourselves!  Pray, no matter your religious affiliation, but remember that good character is like the icing on the cake in addition to prayers. Why does God seem to bless those we see as the evil ones so abundantly,  even more than those who spend every second in the church? God's ways are not our ways.

On a serious note, the poverty rate in our country should not be a justification for you to practise falsehood in the name of  "miracle working." Retrace your steps and find meaningful ventures to make ends meet. To be continued. ..