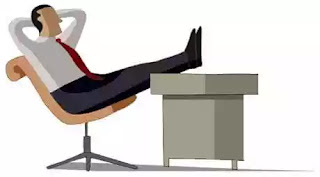 When a boss dates his female employees...

I went for a medical check up at a private hospital. After the regular preliminaries at the reception with the often lousy and unprofessional nurses, I waited for my turn to see the doctor. Luckily, the Chief medical Director was the one consulting. When I eventually sat face to face with the obese doctor, he opened my folder and after a careful perusal, paused for a few seconds before eventually jamming the bell on his table. Obviously, it was a summon for whichever nurse that was on duty. Within a few seconds, a petite nurse came in.
"where did you record the B.P and sugar level reading of this patient? " he asked. The obviously embarrassed nurse waited a while before responding.
"I was not the one on duty when he came. It was Confidence that was on duty. "
"Fetch her immediately, " the doctor ordered.
While waiting for the so called 'Confidence ' to come and explain why she did not carry out one of the basic duties a nurse should do before a patient is admitted to see the doctor. I was happy that at least when the doctor reprimands her, it would serve as a deterrent to others. But I was greatly mistaken.
When she eventually dragged her feet into the doctor's consulting room, the doctor surprisingly reduced his tone.
"Confidence, why didn't you check this patient's B. P before bringing in his folder? " the doctor asked.
"Bia Emeka, don't disturb me this afternoon! If you can't do it yourself, that's your own business! " shouted the nurse about to make her way out of the room. I was dumbfounded. What gave that nurse such guts? I looked at the doctor expecting him to order her sack instantly.
"Are you answering me like that? "the doctor asked in a quieter voice.
Lo and behold, nurse Confidence hissed and stormed out of the office. The doctor tried to redirect my attention, but I had had enough. I quickly excused myself and took the next available 'okada' to a nearby clinic.

The above is experience is what you get when randy bosses spend time screwing their employees. Lawlessness and disorder is what you see. A lot of businesses collapse, a lot of hitherto successful men crumble because of such indiscipline and recklessness.

It is against the ethics of every profession for one to have amorous escapades with one's boss, employee or even colleague. In some climes, even married couples are not allowed to work in the same establishment.

It is a well known fact that 'office flings ' is a contributing factor to marital problems and the plethora of divorce cases piled up in law courts. The boss-secretary relationship has virtually taken over most establishments.

Any entrepreneur or worker should know where to draw a line between business and pleasure. Successful career men and women faced business head on.

No one says you shouldn't have occasional flings (not for those who are married). But, avoid your workmates, bosses, employees and subordinates like a plague. Business and pleasure are fraternal twins.