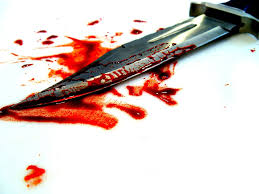 To murder implies taking someone's life, albeit advertently, at least to a layman's understanding. We are always quick to berate armed robbers, kidnappers and other 'men of the underworld', not forgetting those who kill with 'remote control'(you know what I mean). To many,  these are the dreaded groups of persons to be avoided like a plague and kept at an arm's length. Looking inwards however, we might just have killed or are killing someone unknowingly. How?

Killing is not just carried out using firearms or any other physical forms to snuff out life out of someone. Our reaction to situations as well as the choice of words in displaying our emotions can tantamount to murder. Killing one's spirit in the form of our choice of words as well as actions can be graded in the same for as exterminating one's life! When you are dead in spirit, you have nothing to live for again.

Using someone's disability (whether physical or otherwise) or the person's achilles heel to derogate the person is a terrible act. Do you need to constantly remind a physically challenged person of his/her condition before you drive home a point? Or a childless woman about her inability to bear a child? In trying to correct a child, does a parent or teacher need to dress down such a child, or remind/reiterate the child's academic or social inadequacies before that child?

It amazes me when I see two supposedly mature adults exchanging hot and vulgar words over an issue that could be handled maturely, each trying to out-do the other in such unnecessary madness. There is power in words, and words said can never be withdrawn. You may retract a statement, but it's for formality sake, because the damage had been done. Just as nice words soothes the mind, vulgarity destroys same. Is it not surprising that many people would prefer been chastised to been scolded.

When I hear parents use derogatory words on their children, I shudder. Must you use words like 'goat', 'idiot, etc on your children to correct them? If you call your children 'goats,' I wonder what you are. No one says you should not scold your children, but decorum should be employed. Negative words would end up destroying the child further.
Verbal assault may be forgiven but not forgotten. Do not allow your temperament to lead you to vulgarity.

You may not appreciate the dangers of gossip, until you become a victim of it. Bearing false witness against someone is same as having killed the person. You have succeeded in portraying the person in negative terms, and it will take a miracle to undo the damage.

Be wary of what you say, or do. Eschew vulgarity no matter how provoked you are. Carelessness in speaking is not a sign of maturity and responsibility. In whatever you do, have the Golden Rule at the back of your mind.