Why sell our daughters? 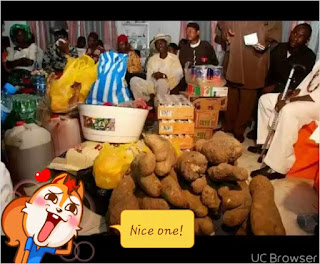 A lot of people are of the opinion that society at large has deteriorated morally, to the extent that there are hardly women who are 'marriage materials'. While I don't agree with the latter assertion (because I have seen a few who are truly godly at least by certain standards), the issue of moral bankruptcy is not peculiar to the female folk; everyone irrespective of gender is as guilty. Come to think of it, it is surprising that a lot of supposed 'good girls' sit back at home while those believed to be morally out of sorts get married on daily basis.
Controversial as u may see this, I believe in the fact that 'husbands' are scarce, let alone the good ones. A lot of girls want to marry men who are rich ,handsome, young and God fearing. Many end up marrying the exact opposite. Well ,that's by the way.
There is obvious reluctance on the part of men to marry these days. One may easily point to financial constraint as the main reason for this. But current available facts show that a lot of successful men remain single. One of the reasons for this is the fact that these days, people venture into romantic relationships prematurely. When they begin to have romantic and sexual relations ,there would be nothing to look foward to in marriage. I am bold to say that a lot of single guys spend more than married men. Of course, maintaining girlfriends has sapped a plethora of men of their life earnings. Money that should have been ploughed into meaningful ventures are wasted on the alter of boyfriend - girlfriend relationships.
This article is in sympathy with those men who truly wish to marry, but lack the financial muscle and wherewithal to achieve their goals.
That a lot of women are unmarried today is as a result of sheer greed on the part of their parents or kinsmen. The continuous hike in bride price/dowry in our society is alarming. I wonder how many men in our difficult society today can afford the outrageous and doctored items on the 'lists' for dowry and at the same time be expected to bankroll the traditional marriage ceremony and the white wedding in quick succession. When a man expects his daughter's suitor to provide items like roofing sheets, bags of cement, expensive clothing materials, to mention but a few, he should plan to marry his daughter eventually. Some even try to recoup all the expenses they made on their daughters. Even if he ends up getting an 'unsuspecting' man to fulfil these, his daughter would be going into a furnace, as she would not be seen in good light by her in - laws.
The issue of exorbitant bride prices is not peculiar to a particular section of the country, it is universal.
Women are not for sale. The preoccupation of parents should be for their daughters to have blissful marriages. We are tired of the prevalent 'nna ga anu' syndrome.
On a lighter note, why would a guy who buys an iphone for a lady not be able to afford any list given him